Tulsa, OK– It took more than 60 minutes for the Oilers to win their final two games of the weekend, but in doing so they swept their weekend competition and came within two points of the Allen Americans in the Central Division standings. Phil Brewer and Dan SeSalvo scored the Oilers two regulation goals, while Axel Blomqvist scored the shootout game-winning goal.

The Oilers continued their weekend theme of scoring first. Phil Brewer scored his 16th of the season by deking through the Americans defense after a feed from Brian Nugent. The goal came at the 17:20 mark of the second period. Christophe Lalancette was credited with the secondary assist.

Tulsa would jump out to a two-goal lead when Dan DeSalvo scored a shorthanded goal at the 6:14 mark of the third period. The goal is DeSalvo’s 15th of the season and came when he elected to shoot during a two-on-one situation. Connor Kucera had the only assist on the goal.

Allen wasn’t prepared to go away quietly. Vincent Arseneau scored his fifth of the season off of a one-timer on a feed from J.P. LaFontaine, who was behind the net. Chris Crane was credited with the second assist.

Ex-Oiler Gary Steffes decided he wasn’t ready to leave his old home quite yet and scored his 16th of the season at the 16:00 mark of the third period. Tristan King and Dyson Stevenson had the assists.

Neither team would find the back of the net during regulation and the game headed into overtime. Both goalies would stop every puck in overtime, forcing the game into a shootout.

Both goalies continued to play strongly and no one found shootout success until Axel Blomqvist wristed a shot over Joel Ruempul’s right shoulder in the eighth round. Oilers goaltender Jussi Olkinoura would stop LaFontaine’s ensuing shot to crown the Oilers victorious.

Tulsa will look to extend their three-game winning streak this Tuesday, at 7:05 p.m. in the BOK Center against the Idaho Steelheads. 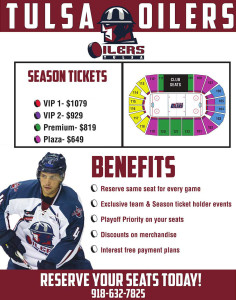 This weekend is going to be an extraordinary weekend jam packed with special experiences. Friday night, the Tulsa Oilers are giving away adult jerseys, sponsored by Safelite Autoglass, for the first time in Oilers history! Starting when the doors open at 6pm, the first 1,000 fans through the doors will be given a jersey to wear when they represent their team, right here in Tulsa. Saturday night, the Tulsa Oilers will be hosting a jersey auction immediately following the game. The boys will be dressed in National Wild Turkey Federation sweaters and even better, some of the . If you haven’t seen these special edition jerseys yet and can’t fathom waiting until you get to the BOK Center on saturday night, head over to our facebook page to check out a few previews. If you are looking to avoid any sort of previews because you want to be absolutely in awe when you see them for the first time tomorrow night, go ahead and skip to the next paragraph because the remainder of this one will be nothing but spoilers. Spoiler Alert: In a single sentence, these jerseys are sick. First off, they are camo, however there is also a hint of orange, white and brown. You know, the typical hunting colors. You are definitely going to want to get your hands on one of these. Not only will they have been worn in a game, they will also be autographed by a player afterwards! Make sure to head over to the ONEOK Club after the game to get your binning cards. You can also get access to enter a raffle for a jersey, as well as a gun! You are gonna wanna put this on the top of your things to do in Tulsa to do list.

When you and your family are looking for a truly unique experience to do right here in town, head on down to the BOK Center on a Sunday afternoon when the Tulsa Oilers are playing a home game. Which, if you didn’t know, is this Sunday. So what makes Sundays at the BOK Center so spectacular? Post game skates with the players of course. These are great nights where you can hop on the ice after the game and some of our players will join you for photos, autographs and just saying hello. This Sunday, February 21st will be the last Sunday of the regular season that the Oilers will be hosting such an event. If you have your own skates, don’t forget to bring them with you to the game so you can hop on the ice right after the final whistle has blown. If you don’t own a pair of ice skates, don’t worry. The Oilers have your back. We will have rental skates available for only $3 per pair. Unfortunately we don’t have camera for rent so don’t forget to pack yours so you can complete your collection of the entire team this season. If you have already gotten your pictures with the players, print them out and have them sign them on Sunday night. If you have merchandise you want to have signed, don’t forget to stick that in your game day bag, too. It’s sure to be a great time. We can’t wait to see you all weekend!

Newly assigned to Tulsa, Jiri Fronk hasn’t hesitated to help his line light the lamp. Fronk hails from the Czech Republic, however he has continued to be an asset to North American teams. Fronk skated in 21 games and produced six goals and also assisted in one other. Fronk played with the Cedar Rapids Roughriders during the 2014-2015 season. The Roughriders are a Tier 1 Juniors hockey program located in Cedar Rapids Michigan. Jiri fits right in with the Tulsa Oilers, so make sure to add a trip to the BOK Center to watch him play on your things to do in Tulsa list.

The Oilers and Americans get together for the 13th time during this 2015-16 campaign. Tulsa is 7-5-0-0 against Allen, a team they’ve been chasing the coat tails of all season.  The Oilers have gone 5-2 against Allen at home and will have the advantage as the next two of three matchups will be in the BOK Center.

Last night the Americans were able to tally four goals against the Oilers but rookie forward Dan DeSalvo wouldn’t allow the fifth and overtime goal go to anyone but Tulsa. With six seconds left in the extra five minutes, the Oilers put to sleep the Americans. Today Allen returns in a 4:05 matinee battle.