The Tulsa Oilers announced Monday that the Manitoba Moose, Tulsa’s American Hockey League affiliate, have re-assigned defenceman Brennan Serville to the Oilers.
The Pickering, Ontario native has split the 2015-16 campaign between the Oilers and Moose.
Serville, 22, has skated in 17 games with the Oilers where he produced an assist on October 16 against the Wichita Thunder.
The 6-foot-3 defenceman was drafted by the Winnipeg Jets in the third round of the 2011 NHL Entry Draft (#78 overall).
The Oilers are on the road this Friday where they will face the Missouri Mavericks in Silverstein Eye Center Arena. 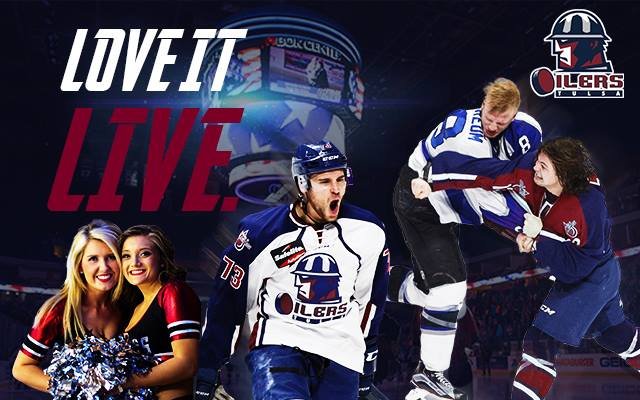 Locker room DJ, Mathieu Gagnon, is spending his fourth professional year in Tulsa. Making his professional debut with the Fort Wayne, Indiana Komets, Gagnon played in a total of six games earning an assist and racking up twenty two penalty minutes. His first full season was spent split between the Stockton Thunder in the ECHL and the Bridgeport Soundtigers of the American Hockey League (AHL). While representing the Thunder, Gagnon could be seen forty three times in a Stockton sweater. While in California, he was responsible for a goal and assisted in two more. He was able to tally up 136 minutes in the penalty box. Gagnon played in seven games for the Soundtigers and registered fourteen penalty minutes.

After the spending last season with the Springfield Falcons, scoring one goal, Gagnon was welcomed to Tulsa with open arms. In his thirty eight games as a forward with the Tulsa Oilers, Gagnon has scored one goal and assisted in two more. He’s also managed to spend 115 minutes behind bars, on track to reset his personal record of 136 during his forty three game stance with Stockton. That record wasn’t even the team’s highest, however, he was ranked second on the team for penalty minutes with the Stockton Thunder.
Second year professional Dennis Brown is spending his first years stateside. Brown started his professional career with the Ontario Reign. Ironic because most of our Canadian born players spend time with American teams while Brown, a Los Angeles born- California raised player started out with a contract to a team outside of Toronto in Ontario, Canada.

Backtracking just a hair more, Brown spent three seasons as a junior in the United State Hockey League and another with the Topeka Roadrunners of the NAHL. During his first season he played for the Topeka Roadrunners, North American Hockey League, he was named to the Robertson Cup All-Tournament Team. His performance during the 2009-2010 season add his name to the USHL All-Star team during his final season with the Omaha Lancers. All in all, he scored fourteen goals and had seventy one assists total in the USHL.

When his time in juniors came to an end, Brown, a finance major, became a Bronco at Western Michigan. In his freshman season, he helped the team beat Michigan in the CCHA Semifinals to escalate them to the CCHA Championship for the first time in over two decades. He also had multiple lone shootout goals. Brown’s sophmore performance against the Notre Dame Fighting Irish earned him the CCHA Defenseman of the week during a game. In his junior year, Brown was the team’s second best defenseman, led the team in assists with fifteen and scored a career high of three goals.

Brown started the current season with the Manchester Monarchs before he was traded to the Tulsa Oilers on October 20th. In his first game representing the Oilers on October 23rd at Quad City, he recorded his first assist. The next night, again at the Quad City Mallards’ Barn, Brown had two assists. His first goal as an Oiler was against rival Missouri Mavericks the night before Halloween, right here in Tulsa at the BOK Center. Since then, he has had several multi point games in an Oilers sweater. He is truly finding his niche in this town.
If you are looking to catch Mathieu Gagnon and Dennis Brown live in action, you have to come to a Tulsa Oilers game during one of the few remaining games in Tulsa right here at the BOK Center. While we only have five home games left of the regular season, it is all about quality, not quantity. Our next home game is Friday, March 18th against the league front runner, Missouri Mavericks. Only two teams have managed to beat Missouri at their rink in Independence, Missouri- a suburb of Kansas City. The Tulsa Oilers have done it twice, and as we speak, our playing a game in Independence which is still tied at zero. The next night, Saturday, March 19th, the Tulsa Oilers will host the Allen Americans with a 7:05pm start time. Fast forward to the end of March, following a long road trip to both Allen and the Utah Grizzlies, the Oilers will be back at the BOK Center back to back when the Colorado Eagles take over the visiting locker rooms on Tuesday and Wednesday, March 29th and 30th. Our final regular season game will be on April 9th when the Wichita Thunder makes the trek down the Turnpike to face the Oilers on Fan Appreciation night.

You aren’t going to want to miss a single game this season. There will celebrations all around with St. Patrick’s day, two jersey auctions (Harley Davidson and Alzheimer’s Awareness, in case you were curious) and a fan appreciation block party and player awards. If you don’t have the tickets for the remainder of the season secured yet, call our office and ask about our playoff push pack. The pack includes two tickets to all five of our remaining regular season games, an autographed hockey glove and playoff ticket priority. Come and get your hockey fix now because once the sun starts shining and you can’t help but spend all your extra time at the lake you’re going to wish you had spent more time with the boys. If your family and friends are looking to spend a bit of time together without risking a sunburn, the Tulsa Oilers make a perfect solution to you things to do in Tulsa list.

In is fifth season as a professional hockey player, forward Jordan Kremyr, is another player spending his first season in Green Country. Kremyr spent three seasons with the Alberni Valley Bulldogs of the British Columbia Hockey League where he was able to record a total of seventy five points, twenty nine goals and forty six assists during a sixty game season. In all three season, Kremyr racked up eighty two goals and 114 assists. He was an assistant captain for the Bulldogs and was on the BCHL All-Star team twice. He was also awarded most valuable player, top scorer and most sportsmanlike player for the team. During the 2006-2007 season, Kremyr was selected as the Chevy Fan Favorite. He was responsible for four game winning goals in overtime, as well as seven other game winning goals.