TULSA, OK – The Tulsa Oilers, proud member of the ECHL, and Head Coach Rob Murray announced the signing of forward Charlie Sampair Thursday for the 2017-18 season.

Sampair, 23, reunites with Murray in Tulsa, after spending his entire first pro season with the Alaska Aces in 2016-17. The St. Paul, MN native recorded 13 points (3g, 10a) in 44 games with the Aces, who ceased operations at season’s end. 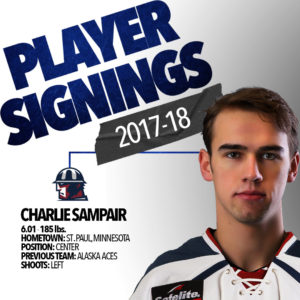 Prior to turning pro, Sampair played four seasons at the University of Minnesota-Duluth from 2012-16, where he totaled 14 points (5g, 9a) in 102 college games, including an impressive +21 plus/minus rating as a junior with the Bulldogs in 2014-15.

The Tulsa Oilers begin their fourth ECHL season and tenth season of hockey at the BOK Center on Friday, October 13, when the Oilers host the Kansas City Mavericks. Season and Group Tickets are on sale now by calling the Oilers front office at 918-632-7825. Visit www.tulsaoilers.com for more information.