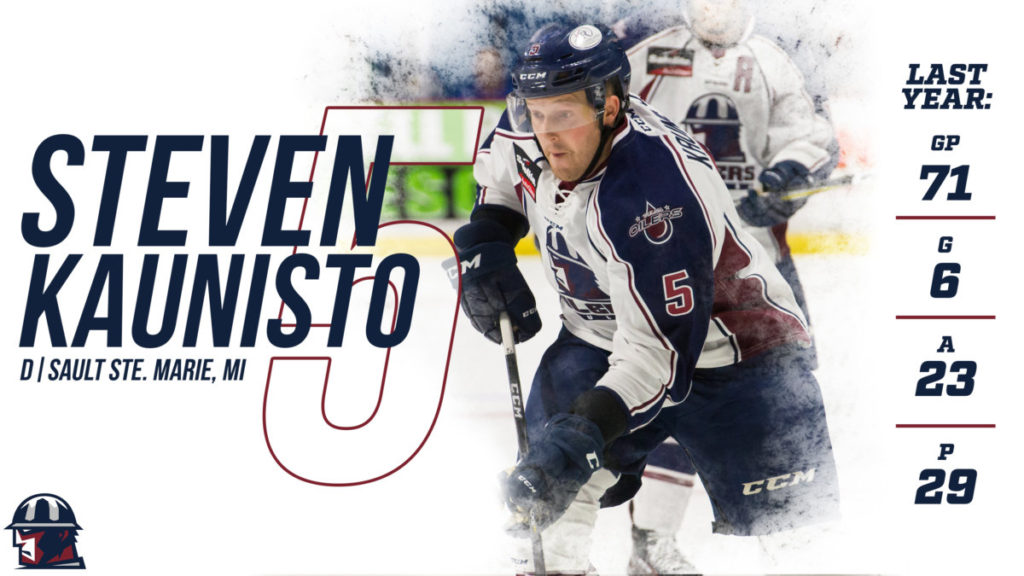 TULSA, OK – The Tulsa Oilers, proud ECHL affiliate of the National Hockey League’s St. Louis Blues, and Head Coach Rob Murray announced the team’s first player signing for the 2018-19 season Thursday. Veteran defenseman Steven Kaunisto agreed to terms on a contract to return to Tulsa for a second season with the Oilers.

Kaunisto, 31, enters his tenth pro season after posting career-best numbers in 2017-18 with the Oilers. The Sault Ste. Marie, MI native was named Tulsa’s Defensive Player of the Year, after compiling 29 points (6g, 23a) in 71 games, high marks in his six-year ECHL career.

“I am excited to be coming back and hope to improve on what I did last year to help the team as much as I can,” said Kaunisto. “We had a pretty good season last year, but fell short of what we wanted to do. With Coach Murray being here all year, I know he will put together another great team and we will get into the playoffs and make a push for a championship.”

The 6’0, 192 lbs. defenseman has 174 points (38g, 136a) in 448 career ECHL and Central Hockey League games. Kaunisto previously played for Reading, Rapid City, Florida, Kalamazoo, Brampton and Elmira in the ECHL, as well as Wichita, Allen, Missouri, Arizona and Denver in the CHL.

“Steve was a great leader for us last season,” said Murray. “His game got better and better as we went along and I’m really happy to have him back in Tulsa. He is a guy that competes and cares every night.”