OILERS EARN A POINT BUT FALL TO MAVS IN OVERTIME

OILERS EARN A POINT BUT FALL TO MAVS IN OVERTIME

Late goal from Tulsa’s Paquette with 1:12 to play forces overtime, but Missouri’s Fox wins the game in the extra period. 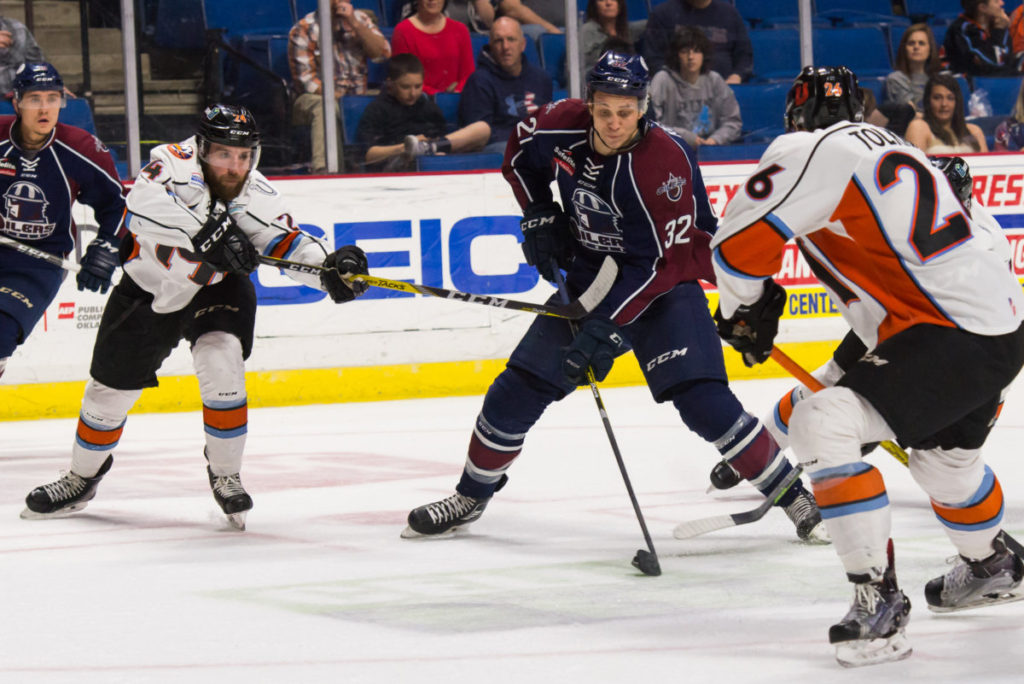 TULSA, OK – In a game that featured several lead changes, the Missouri Mavericks defeated the Tulsa Oilers 4-3 in overtime Saturday at the BOK Center to earn a weekend sweep.

The Oilers outshot Missouri 14-11 in the opening period for the second straight night, but the Mavericks scored with 15 seconds left in the period when a puck ricocheted off of a skate and in. Andrew Courtney was credited with the goal. Missouri goaltender Eamon McAdam, who posted a 53-save shutout Friday, stopped all 14 Tulsa attempts in the frame.

Christophe Lalancette tied the game with seven minutes to play in the second period when Dmitri Ognev set him up with a centering pass from behind the net. Lalancette made a quick move to his backhand for the first Oilers goal in 75 shots this weekend against McAdam. Kale Kessy gave Tulsa a 2-1 lead with 1:19 left in the frame when he cashed in on a cross-crease pass from Adam Pleskach.

Missouri tied the score at 2-2 at 7:57 of the third period, when Radoslav Illo snapped a hard shot under the crossbar from the right circle. Illo added a second goal 5:30 later from the slot to put the Mavericks back in front. Late in the game with goaltender Colin Stevens pulled for an extra attacker, Danick Paquette found the equalizer out of a goal-mouth scramble with 1:12 left in regulation to force overtime.

In the extra period, Dane Fox pocketed the game-winning shot over Stevens’ glove from the left circle with 1:05 left for his third goal of the weekend. Stevens stopped 35 of 39 in the overtime loss, while McAdam 44 of 47 for his seventh straight win.

UP NEXT: The Oilers continue their eight-game home stand in the month of February next weekend with three games in three days. Tulsa hosts Rapid City at 7:05pm Friday at the BOK Center for the final meeting of the season between the two teams. The Oilers then welcome Indy to town Saturday for a 7:05pm puck drop, and finish off the weekend with a Sunday (Feb. 19) matinee with the Wichita Thunder at 4:05pm.