TULSA, OK – A four-goal first period jump-started the Tulsa Oilers to an 8-5 win Saturday over the Allen Americans on the 9th annual “Pink in the Rink” Night at the BOK Center. The victory snapped Tulsa’s seven-game losing streak, in the first of eight straight home games in February. 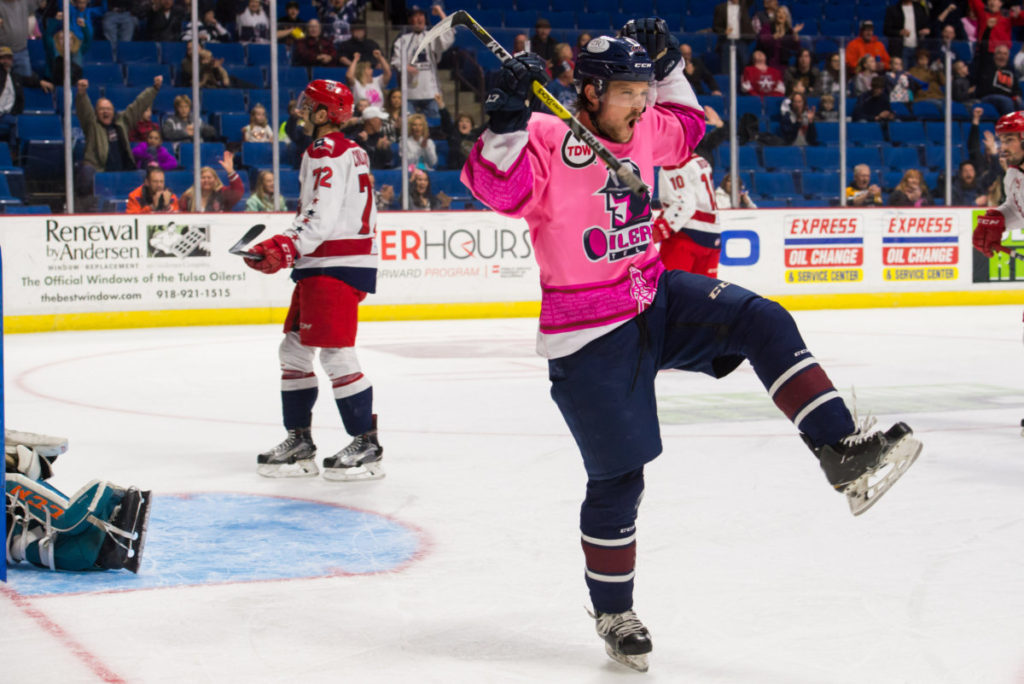 The two teams combined for six first period goals, as Darcy Murphy tallied two in the opening frame for Tulsa. Murphy tipped a Garrett Haar shot past Allen goaltender Jamie Murray 2:17 into the game to get the scoring started. Gary Steffes tied the game at 1-1 with a highlight-reel goal, but the Oilers answered after killing off a penalty, when Christophe Lalancette capitalized on a tic-tac-toe passing play.

Garret Ladd made it 3-1 at 10:06 of the stanza, when he snapped a quick shot over Murray’s glove. Murphy then scored his second when he deflected a Wes Cunningham shot from the point on the Oilers first power play. Tanner Eberle fired a shot past Tulsa goalie Colin Stevens with 1:16 left to complete the first period scoring, as the Oilers led 4-2.

Tulsa added two more power play goals in the second period, as Ladd pocketed his second of the game, and Danick Paquette made it 6-2 on the ensuing man-advantage. Dmitri Ognev spun a shot from the half wall that fooled Murray and gave the Oilers a 7-2 lead heading into the third.

David Makowski scored from the point 2:49 into the final frame and Spencer Asachuk cut Tulsa’s lead to 7-4 just over two minutes later for the Americans. But Tyson Fawcett halted the Allen comeback with his second goal in as many nights 6:57 into the period. Eric Roy scored the final goal of the game with 1:36 left, but the Oilers finished off the 8-5 win.

UP NEXT: The Oilers will spend the rest of February at the friendly confines of the BOK Center, with seven more home games, all on weekends. Next weekend, Tulsa hosts the Missouri Mavericks on Friday and Saturday night. Both games are scheduled for 7:05pm, and tickets are available by calling 918-632-7825 or visiting www.tulsaoilers.com.