Soy, 21, hasn’t appeared in a game yet this season for the Gulls. The rookie forward from Cloverdale, British Columbia posted 92 points (36g, 56a) in 66 games for the Victoria Royals of the Western Hockey League last season. He played two pro games for San Diego in 2016-17 before returning to Victoria for his final season of juniors. The Anaheim Ducks selected Soy in the 7th round of the 2016 NHL Draft.

Poganski, 22, skated in five games for the Rampage this season. He posted two points (1g, 1a) in four games in San Antonio at the end of the 2017-18 season after finishing his senior season at the University of North Dakota, where he captained the Fighting Hawks. The Blues selected Poganski in the 4th round of the 2014 NHL Draft. The St. Cloud, MN native won a National Championship with UND as a sophomore in 2016. 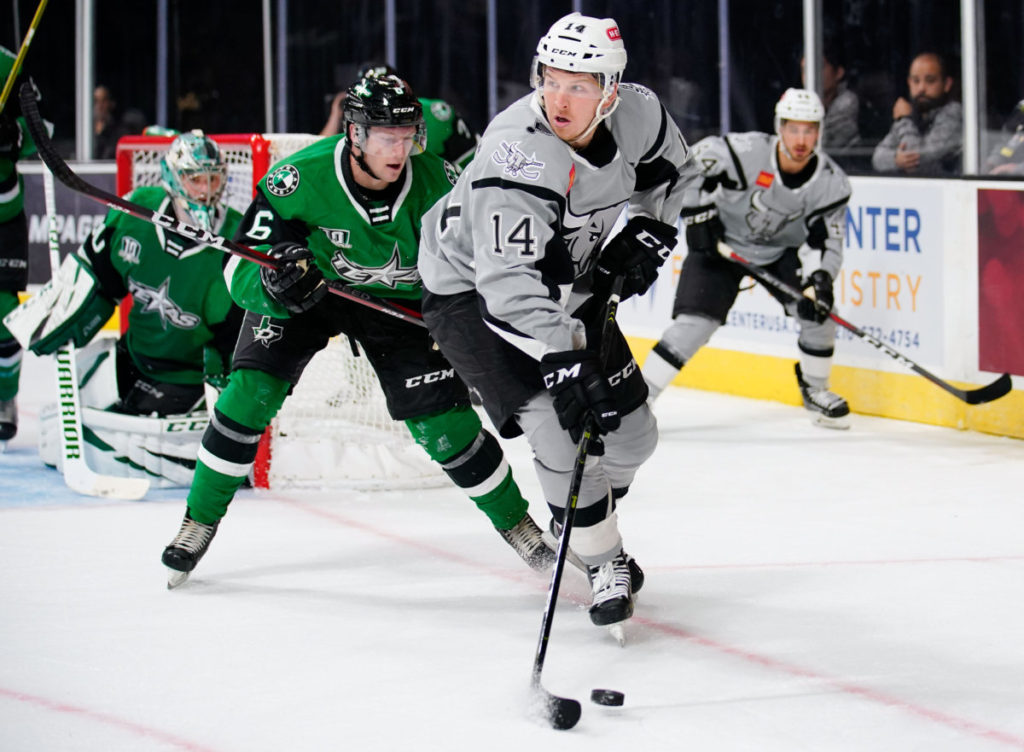 Kaspick, 20, had one goal in three games this season in San Antonio. The rookie from Brandon, Manitoba finished his junior career with the WHL’s Victoria Royals, where he was a teammate of Soy’s. Kaspick previously spent parts of four seasons with the Brandon Wheat Kings and captained the squad to start the 2017-18 season. He totaled 37 points (12g, 25a) in 35 games with his hometown Wheat Kings before joining the Royals in January where he compiled 27 points (13g, 14a) in 25 games to finish the season. After Brandon’s run to the WHL Championship and a Memorial Cup appearance in 2015-16, the Blues drafted Kaspick in the 4th round of the 2016 NHL draft.

Keserich, 32, participated in the Oilers’ training camp and played in the team’s preseason win against the Wichita Thunder. He appeared in one game last February for the Oilers as an emergency backup goaltender in Tulsa’s 6-2 win over Indy. The Parma, OH native last played a full pro season in 2012-13 split between Tulsa and Elmira.

Cuthrell, 24, skated in Tulsa’s season opener, a 2-1 win over Idaho, but hasn’t played since. The rookie out of Nichols College is signed by the Southern Professional Hockey League’s Knoxville Ice Bears and will report to his SPHL team if he clears waivers.

Fitzpatrick, 20, went 1-0-1 in his first two professional starts with a 2.41 goals-against average and .917 save percentage for the Oilers. The Blues’ 2016 second round pick returns to San Antonio where he participated in the Rampage’s AHL camp earlier this month.

The Oilers finish off an eight-game home stand to start the season with three games in three nights next week against the Rapid City Rush at the BOK Center. Tulsa hosts the first game Thursday night at 7:05pm on $1 Beer Night. Fans 21-years-old and above can purchase beers for just $1 at designated concession stands.

Tulsa and Rapid City duke it out again Friday and Saturday at 7:05pm at the BOK Center. The Oilers will wear special St. Louis Blues affiliation jerseys Saturday night, which will be auctioned off after the game.