OILERS 8-0 AT HOME AFTER OT THRILLER

OILERS 8-0 AT HOME AFTER OT THRILLER

TULSA, OK – The Tulsa Oilers stayed unbeaten at home Wednesday, when Dan DeSalvo scored on an overtime power play to defeat the Fort Wayne Komets 4-3 at the BOK Center. Tulsa (10-2-0) is now 8-0-0 on home ice and is at the top of the ECHL standings. 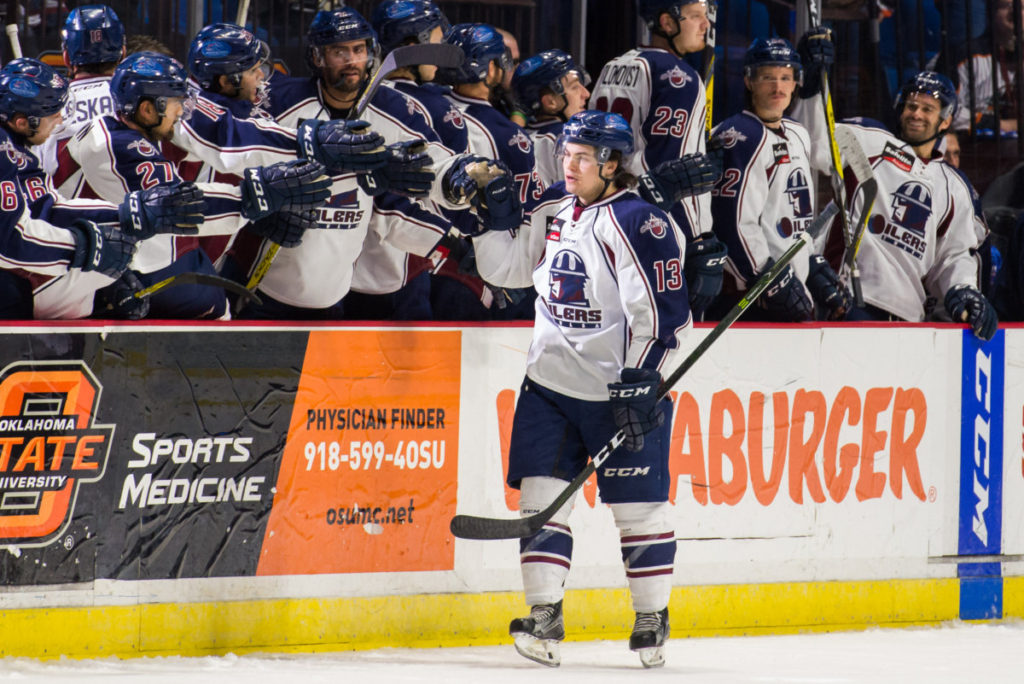 The Fort Wayne Komets take on the Tulsa Oilers at the BOK Center November 09, 2016 in Tulsa, Oklahoma. Photo / TeeJay Crawford

The Komets jumped out with a flurry of shots in the opening minutes, but the Oilers scored in the final minute of the first period, when Phil Brewer fooled Komets goaltender Eric Hartzell from the left circle to give Tulsa a 1-0 lead after one. Goaltender of the Week Jamie Phillips stopped all 12 Fort Wayne attempts in the frame.

Both teams scored twice in a penalty-riddled second period that saw 11 infractions for 28 total penalty minutes. Fort Wayne tied the score at 1-1 on a 5-on-3 man-advantage, when Jamie Schaafsma lifted a backhander over the glove of Phillips. Emerson Clark notched his fifth goal of the season on a penalty shot that came during an Oilers’ penalty kill to give Tulsa its second lead.

Kale Kessy made it 3-1 on a tic-tac-toe passing play 49 seconds later to give the Oilers their biggest lead of the night. Defenseman Eric Drapluk and Christophe Lalancette picked up the two assists. Again the Komets’ power play converted, when Shawn Szydlowski buried a one-timer to cut Tulsa’s lead to one entering the third period.

Fort Wayne’s power play would add a third goal with 25 seconds left in regulation and Harzell pulled for an extra attacker, when Kyle Thomas scooped up a loose puck on the doorstep and lifted it into the net to force overtime. But Clark was hauled down again on a breakaway, drawing a penalty, and DeSalvo fired a shot under the crossbar late in the power play to win it for Tulsa.

The Oilers travel to Wichita Friday for a 7:05pm meeting with the Thunder in the second of 14 meetings in the Stonewolf Cup. Catch the action on www.tulsaoilers.com or ECHL.TV, with coverage starting at 6:50pm. The two teams battle again Saturday in Tulsa at the BOK Center at 7:05pm. The Oilers will wear special “Golden Driller” gold jerseys, featuring a postgame auction of the player-worn jerseys in the OneOK Club on the concourse level.