OIL DROPS: OILERS SECOND IN THE WEST AHEAD OF THREE-GAME THANKSGIVING WEEK

OILERS SECOND IN THE WEST AHEAD OF THREE-GAME THANKSGIVING WEEK 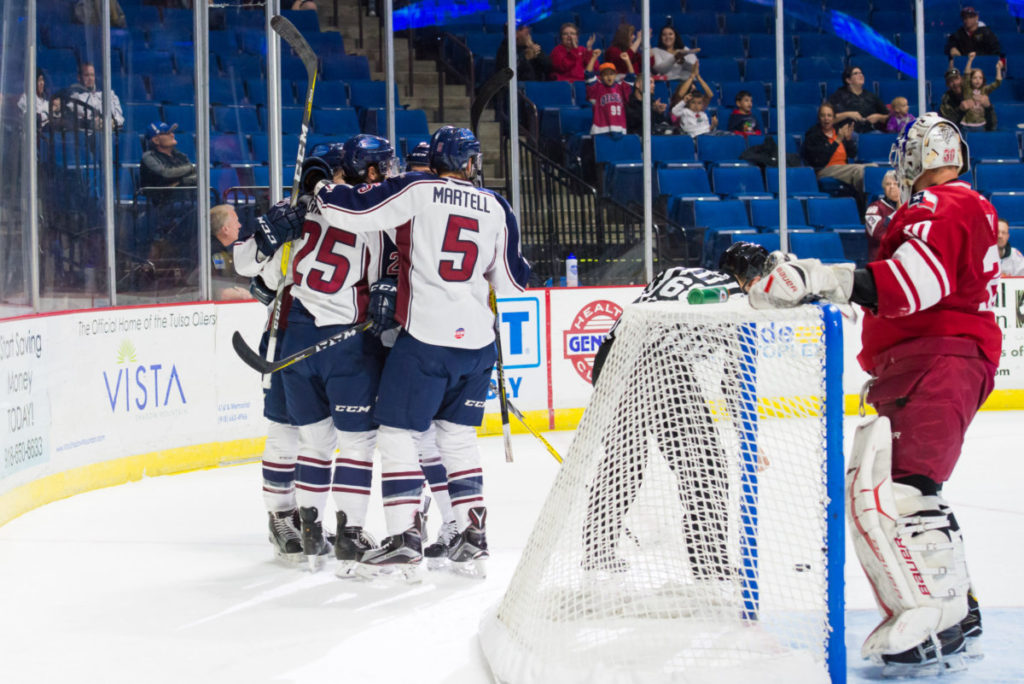 The Oilers were shutout for the first time this season, when Adam Morrison turned away all 37 Tulsa shots for his second straight win since joining the Rush. Brendan Walker gave Rapid City a power play tally in the first period, and Mark Cooper scored on a 3-on-1 rush following a turnover at center ice in the second period. Morrison took it from there, with a little help from the iron. Three Oilers shots rang off of the post during Tulsa’s third period comeback effort.

In the rematch between the Oilers and Rush, Tulsa jumped out to an early 1-0 lead, when newcomer Darik Angeli buried a rebound in the crease during his first Oilers shift 28 seconds into the game. Rapid City tied the score before the first break thanks to a power play goal from Josh MacDonald. The only marker in the second period came off the stick of newly acquired Rush forward Triston Grant, who fooled Tulsa goaltender Colin Stevens with a quick shot from the corner. Jacob Poe evened things up at 2-2, with his first Oilers goal early in the third, but Zach Tolkinen added another power play tally that proved to be the difference.

Tulsa jumped out to a 2-0 lead in the first period in the second meeting with the Allen Americans, when Garrett Ladd and Danick Gauthier each scored unassisted even-strength goals. Reigning MVP Chad Costello scooped up a rebound and put Allen on the board just under seven minutes into the second. Then controversy came into play, as the Oilers had a power play goal taken off the board that would have made it 3-1, when it was determined the net came dislodged before the puck went in. Allen would add a short-handed goal late in the period to tie the game at 2-2. The teams exchanged third period goals (Dennis Brown for Tulsa, Jake Marchment for Allen) as the game went to overtime, before Eric Roy pocketed the game-winner 1:08 into the extra frame for the Americans.

Former Oilers forward Emerson Clark picked up his first AHL assist of the season Saturday in the Chicago Wolves’ 5-0 victory over Iowa…Darcy Murphy recorded an assist Friday in Manitoba’s 5-2 loss at Tucson. He has a goal and as assist in 6 games…Dan DeSalvo has 3 goals and 2 assists in his first 4 games since he was called up to Manitoba 11/10…Kale Kessy is a plus-1, with 4 penalty minutes in his first 3 games with the Moose.

Only four Oilers have played in all 17 games so far this season: Adam Pleskach, Eric Drapluk, Phil Brewer, and Nolan Julseth-White…Pleskach leads the ECHL in shots on goal, with 73. He’s recorded at least one shot in every game.

The Oilers are in second place in the Central Division and Western Conference behind with 23 points, trailing only Toledo…Tulsa is 7-1-1 when scoring first and 6-2-1 in one-goal games…The Oilers power play is 25th in the league (7.8%) and penalty kill is 25th (77%)… The Oilers are 7-2-0 when outshooting their opponent.

The Oilers will wear special Winnipeg Jets themed affiliation jerseys on Saturday, when they take on the Wichita Thunder at 7:05pm at the BOK Center. After the game, the jerseys will be auctioned off in the OneOK Club on the Concourse Level.