Tulsa just one point behind Allen for fourth place after a four-point week with ten games remaining. 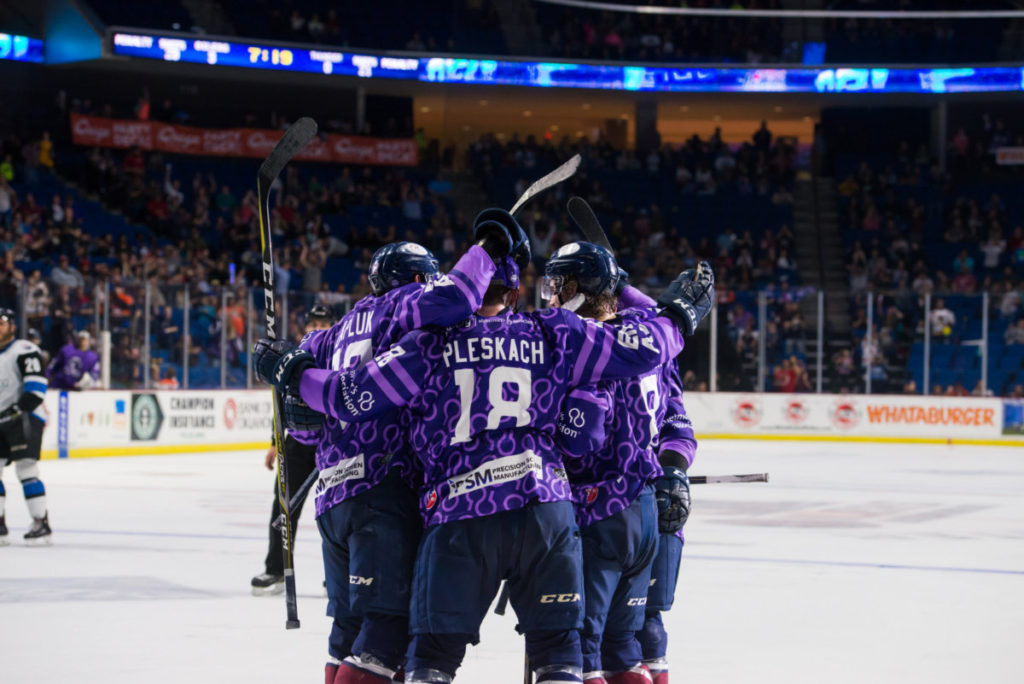 >> The Oilers finished off a four-game road trip with a 3-1 victory over Rapid City Wednesday in South Dakota. Alexandre Ranger gave Tulsa a 1-0 lead with a power play goal in the final minute of the opening period, and Adam Pleskach added a second power play goal in the second period to boost the lead to 2-0 entering the third. Peter Sivak spoiled Devin Williams’ shutout bid with a third period goal with 7:48 to play, but Garrett Ladd buried a shot into an empty net to put the game away late.

>> In the first of two meetings with Wichita over the weekend at the BOK Center, Tulsa jumped out to a 1-0 lead in the first period, when Eric Drapluk fired a shot into the net from high in the slot. After a scoreless second period, Evan Richardson made it 2-0 early in the third when he finished off a setup pass from Roman Ammirato, who notched a pair of assists in his first pro game. Adam Pleskach completed the scoring midway through the frame, as Devin Williams stopped 23 shots in earning his league-leading fourth shutout of the season to cap off Alzheimer’s Awareness Night in front of 12,754 fans.

>> Wichita responded with a dominant first period Saturday, outshooting the Oilers 15-2 and burying two goals in the opening frame. Ryan Tesink cut Tulsa’s deficit to 2-1 with a second period tally that turned out to be the Oilers’ only goal of the game. The Thunder capitalized on a turnover to open their lead back up to two goals before the second break, and increased the score to 4-1 early in the third period. Nick Riopel stopped 28 of 29 to pick up the win, while the Oilers saw their 6-game home point streak snapped.

The Mountain Division playoff race is even tighter heading into the final four weeks of the regular season. While Colorado has already clinched a one of the four spots and Idaho looks certain to be the second team in, Wichita sits in third place with 70 points. The Thunder have 10 games remaining—8 of which are on the road—and lead Allen by 4 points in the standings. The Americans have 12 games left on their schedule. Tulsa sits in fifth place with 10 games to play. The Oilers are 5 points behind Wichita and 1 point behind the Americans. Utah is within striking distance in sixth, just 4 points behind Allen with 11 games remaining.