The Oilers earn three of a possible eight points in grueling four-game series against Mavericks to wrap up 2017. 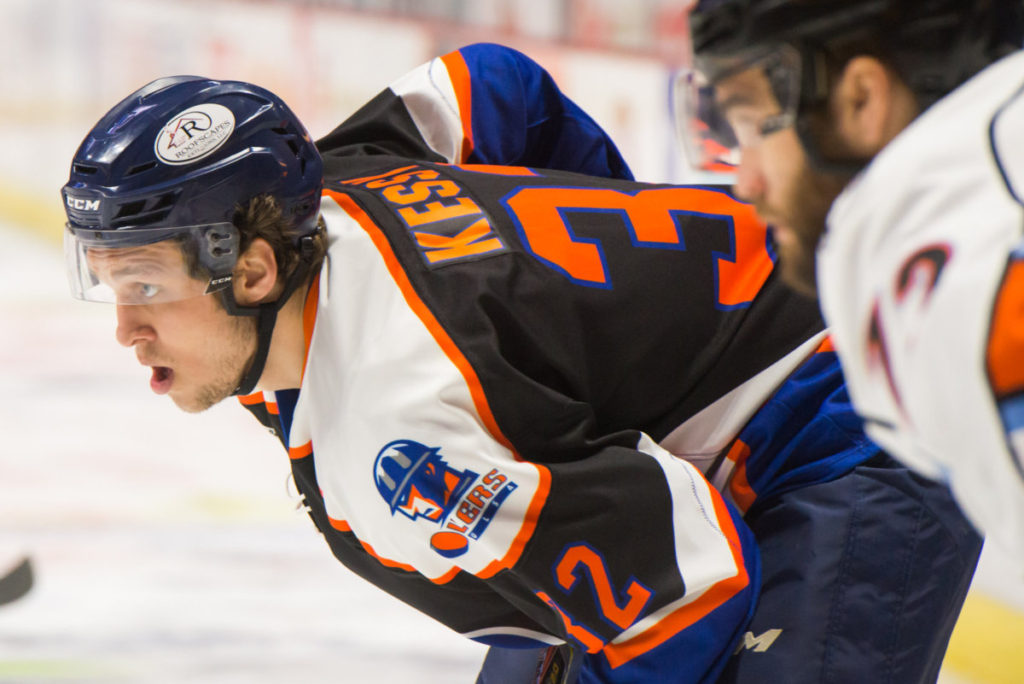 >> The Tulsa Oilers led by one goal three different times Wednesday in the first of four meetings last week against the Kansas City Mavericks. Each time Kansas City had an answer. Dylan Hubbs and Vladimir Nikiforov notched Tulsa’s first period goals, but the Mavericks evened up the score at 2-2 after one. Adam Pleskach against put the Oilers in front in the second period, but Kansas City found a late goal to force a 3-3 tie after two. Matt Robertson gave the Mavericks their first lead early in the third period, in what turned out to be the game-winning goal and his second marker of the night.

>> After two scoreless periods to start Friday’s game in which Oilers goaltender Devin Williams and Mavericks goalie Mason McDonald each stopped all 19 shots they saw, Kansas City broke the scoreless deadlock early in the third period. Tulsa had an answer, when Ryan Tesink re-directed a shot from the point, but the Mavericks jumped back in the lead with just under eight minutes to play, when Matt Robertson scored his third game-winning goal against the Oilers this season. Kansas City sealed the win with an empty net goal late.

>> The Oilers snapped a 9-game skid against the Mavericks that dated back to Dec. 27, 2016 on Saturday with a convincing 4-1 win. Charlie Sampair opened the scoring with a first period short-handed goal, before Dmitrii Sergeev and Dylan Hubbs increased the lead to 3-0 by the end of the middle frame. Kansas City’s Mark Cooper snapped Jake Hildebrand’s shutout bid with a goal 2:20 into the third period, but Oilers defenseman Steven Kaunisto tallied a power play goal to complete the scoring. Hildebrand stopped 30 of 31 shots in the victory.

>> Following a scoreless first period on New Year’s Eve, Tulsa took a 2-0 second period lead when Garrett Ladd and Ryan Tesink scored back-to-back goals. The Mavericks cut the Oilers’ lead to one when Jordan Kwas buried a goal on a delayed penalty in the final minute of the stanza. Eric Freschi knotted up the score at 2-2 in the third period, and Jared VanWormer deflected the puck into the net on a Kansas City power play to put the Mavericks in the lead. Late in regulation with the goaltender pulled for an extra attacker, the Oilers forced overtime when Kale Kessy scored a dramatic goal with 6.8 seconds to play. After a scoreless overtime, the Mavericks edged the Oilers 2-1 in a shootout.

Kale Kessy’s goal with 6.8 seconds left in regulation Sunday at Kansas City was the latest goal the Oilers have scored in a period all season. That goal tied the New Year’s Eve game at 3-3 and forced overtime, as the Oilers gained a point in an eventual shootout loss to the Mavericks.

The Oilers will wear special National Wild Turkey Federation jerseys on Saturday, Jan. 6 during the game against the Colorado Eagles at 7:05pm on the York Pluming Ice at the BOK Center. The jerseys will be auctioned off after the game in the OneOK Club on the concourse level, with proceeds going back to NWTF.

For the first time this season, fans will have a chance to head down to the ice after Sunday’s game against the Colorado Eagles for a postgame skate with Oilers players. Don’t miss out on this great family event, as game time is scheduled for 4:05pm. Tickets are available by calling 918-632-7825 or visiting www.tulsaoilers.com.