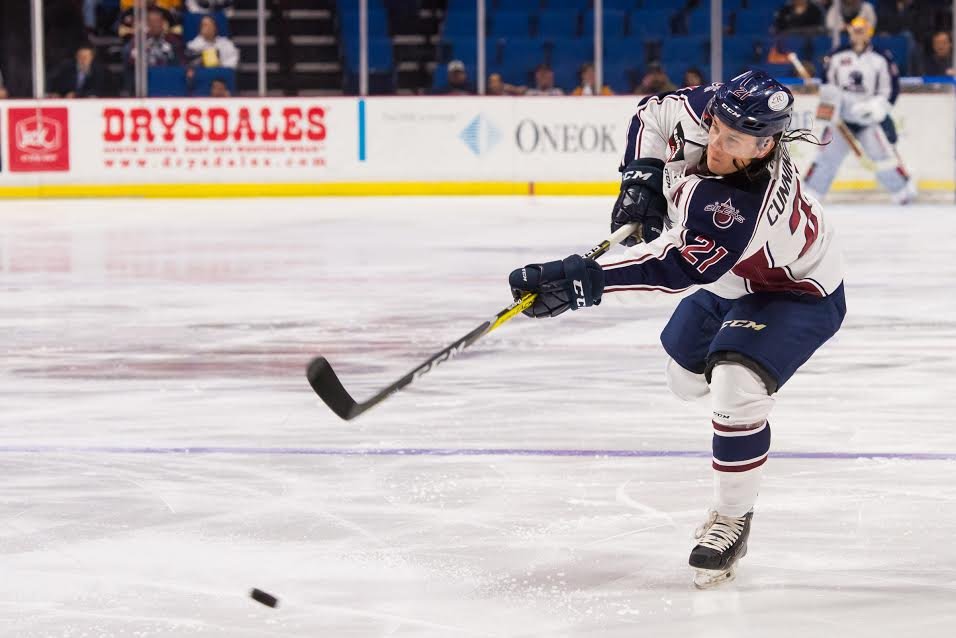 In a goaltender’s duel between Allen’s Riley Gill and Tulsa’s Colin Stevens, the two teams needed overtime to find a winner. After Stevens stopped two Americans’ breakaways in the extra period, Greger Hanson scored the game-winner to end the Oilers’ three-game winning streak.

In the fourth meeting of the season and first in the Lone Star State, the Americans jumped out to a 1-0 lead after one, thanks to a power play goal by Spencer Asuchak. The Oilers scored three straight in the second period, as Ben Murphy started the scoring, and Dmitri Ognev and Chris Joyaux each tallied their first career goals. Allen added another power play goal late in the frame to cut Tulsa’s lead to 3-2. Goaltender Jamie Phillips and the Oilers’ penalty-killers stopped the Americans on two late power plays, and Danick Gauthier added an empty net goal to seal the win.

Allen jumped out to a 2-0 first period lead Saturday, when Spencer Asuchak scored his second of the weekend, and Gary Steffes added a power play goal. Ben Murphy cut the Americans’ lead in half, which he would do again in the third period, after Jason Fram gave Allen a 3-1 lead on a wraparound goal before the second intermission. Murphy’s second goal made it 3-2 with 5:49 left in regulation, but Bryan Moore added an insurance goal for the Americans on a breakaway with 4:14 to play. Gill won his third game in the last four, while Stevens suffered the loss.

Dan DeSalvo is second on the Manitoba Moose with 14 points in just 11 games, and is tied for the team lead in goals (7). DeSalvo has points in six straight games and scored two goals, including the game-winner Sunday in Manitoba’s 5-4 victory over the Texas Stars…Kale Kessy picked up his first assist of the season for the Moose on Saturday against Texas. He has played in nine games for Manitoba…Emerson Clark has 1 assist in 4 games with the Chicago Wolves.

Goaltender Jamie Phillips has won his last three starts. His last regulation loss was November 16th against Rapid City…Phil Brewer, Eric Drapluk and Nolan Julseth-White are the only three Oilers who have played in all 23 games this season…Ben Murphy has 3 goals and a shootout winner in his last 5 games. He recorded his first multi-point game (2 goals) in Friday’s 4-2 loss at Allen…Phil Brewer has 3 assists in his last 2 games…Christophe Lalancette has a goal and 5 assists in his last 6 games.

Dennis Brown recorded his 50th ECHL assist Friday at Allen…Captain Nolan Julseth-White is 5 games from 250 as a pro, including his time in the ECHL, AHL and France…Danick Gauthier needs just 6 more ECHL games to reach 200 for his career…Dmitri Ognev and Chris Joyaux each recorded their first career ECHL goal Friday in Tulsa’s 4-2 win at Allen.

This Friday is the Oilers’ annual Teddy Bear Toss, when Tulsa hosts Missouri at 7:05pm at the BOK Center. Fans are encouraged to bring as many new teddy bears as they can carry to the game and can throw them onto the ice when the Oilers score their first goal. Teddy Bears will be donated to the Salvation Army.

The Oilers will wear special jerseys Friday sponsored by the National Wild Turkey Federation. After the game, the jerseys will be auctioned off at the OneOK Club on the concourse level.