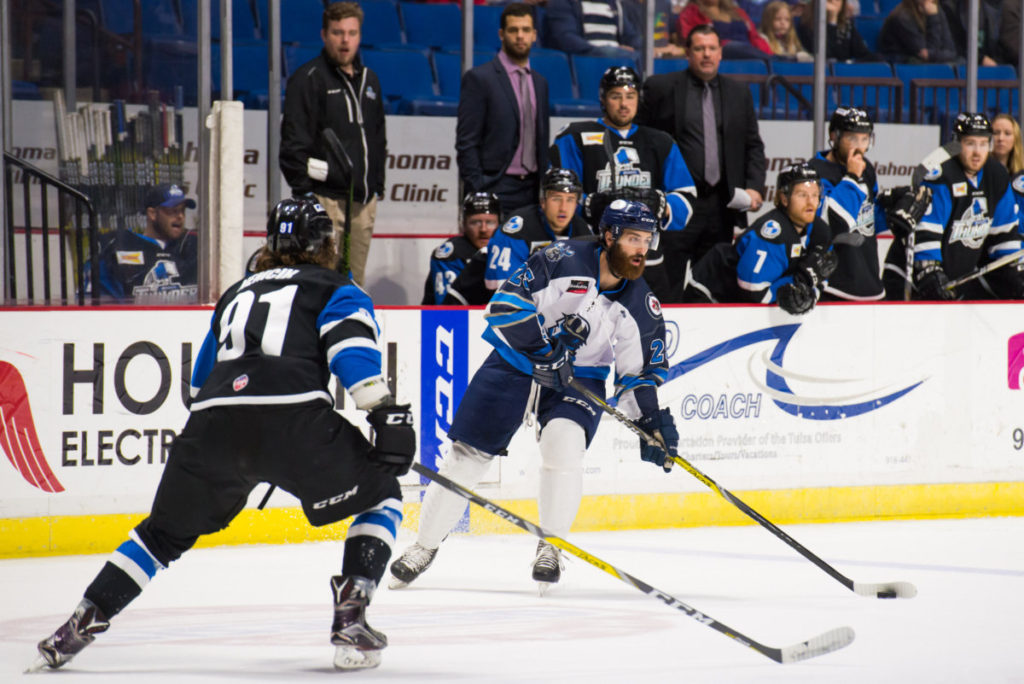 The Tulsa Oilers started off the week by jumping out to a 3-0 first period lead in Wichita against the Thunder, thanks to goals from Shawn Bates, Darik Angeli and Christophe Lalancette. The Thunder cut into the lead with a second period power play goal from Gabriel Gagne, but Angeli added a second goal to boost Tulsa’s lead to 4-1 just 24 seconds into the third. Alexis Loiseau picked up a second Wichita power play goal with 3:30 left, and Blake Tatchell made it 4-3 with 2:18 to play, but the Oilers managed to stop the comeback in its tracks to snap a three-game winless skid. Jamie Phillips earned his 12th win of the season with 27 saves.

After a scoreless first period, Phil Brewer and Jessey Astles tallied goals for Tulsa 50 seconds apart in the first two minutes of the middle frame. Wichita cut the Oilers lead in half when Alexis Loiseau scored a power play goal for the second straight night. With 7:59 to play in regulation, James Melindy tied the game on another Thunder man-advantage, but Ben Murphy recorded his first Oilers goal of the season on a 2-on-1 rush with 2:44 left to put Tulsa back in front for good. Adam Pleskach added an empty-net goal, and Colin Stevens secured the first win by a Tulsa goaltender not named Jamie Phillips. Stevens stopped 25 of 27 Thunder chances.

Alexis Loiseau scored a breakaway goal eight minutes into Saturday’s game to give the Thunder an early lead. It was Loiseau’s fifth goal against Tulsa and third in as many games. The Oilers heavily outshot Wichita 12-6 in the second period, but were shut down by rookie goaltender Drew Owsley. Tulsa continued to generate chances in the third, and eventually Adam Pleskach deflected a shot past Owsley on an Oilers power play with 5:03 left in regulation. It was Tulsa’s first power play goal since November 9th (33 opportunities) and it forced overtime at the BOK Center. After a scoreless extra period, Ben Murphy scored the only goal in a three round shootout, and Jamie Phillips stopped all three Wichita shooters to get Tulsa their third straight win and fourth consecutive victory over the Thunder.

Defenseman Tyson Wilson was recalled by the Manitoba Moose on Saturday, after compiling 3 points (1 goal, 2 assists) in 15 games with the Oilers. Wilson played 3 games with the Moose in 2015-16 after finishing his college career at Robert Morris University…Dan DeSalvo has 10 points (5 goals, 5 assists) in just 8 games with Manitoba after signing a tryout agreement with the Moose on November 10th. He has factored into the scoring on 10 of Manitoba’s 14 goals since his arrival…Kale Kessy has appeared in 7 games for the Moose since signing a tryout agreement on November 10th…Forward Emerson Clark has 1 assist in 4 games since the Chicago Wolves recalled him November 13th.

Four Oilers have played in all 20 games so far this season: Adam Pleskach, Eric Drapluk, Phil Brewer, and Nolan Julseth-White…Pleskach leads the ECHL with 83 shots on goal and a plus-16 rating. He has points in 3 straight games and goals in consecutive contests…Christophe Lalancette has recorded at least a point in 10 of his last 13 games, and had a goal and 4 assists last week in 3 games…

Adam Pleskach recorded his 200th professional point with an assist Wednesday in Tulsa’s 4-3 win at Wichita… Danick Gauthier played his 250th game as a pro Friday in Tulsa’s 4-2 win in Wichita, and needs 1 point to reach 150 in his career…Defenseman Brandon Martell’s next game will be his 200th in his ECHL career.

The Oilers are in first place in the Central Division and Western Conference with 29 points, after picking up six of a possible six points last week…Tulsa is 9-1-1 when scoring first and 8-2-1 in one-goal games…The Oilers power play is 25th in the league (8%) and penalty kill is 26th (74.3%)… The Oilers are 10-2-0 when outshooting their opponent…Tulsa is 4th in the ECHL in shots on goal per game, averaging 34.45.

Tuesday is “Dollar Beer Night” at the BOK Center, when the Oilers host the Allen Americans at 7:05pm. Thirsty fans 21 and older can visit the designated beer stand on the concourse for $1 beers!