Tulsa prepares for second stretch of four games in five days, with two matchups each against Grizzlies, Mavericks.

A goal by Dan DeSalvo ten seconds into the contest got the Oilers off to a fast start against the two-time defending Kelly Cup Champions. Tulsa quickly opened up a 2-0 lead against the Americans 2:26 in, when ECHL Player of the Week Emerson Clark scored his fourth goal in the last four games. After Allen cut the lead in half late in the opening frame, Reid Halabi scored his first Oilers goal against his former team in the final minute of the frame. Jamie Phillips stopped 24 of 25 third period shots for a career high 44, earning his fifth straight win to start his rookie season. 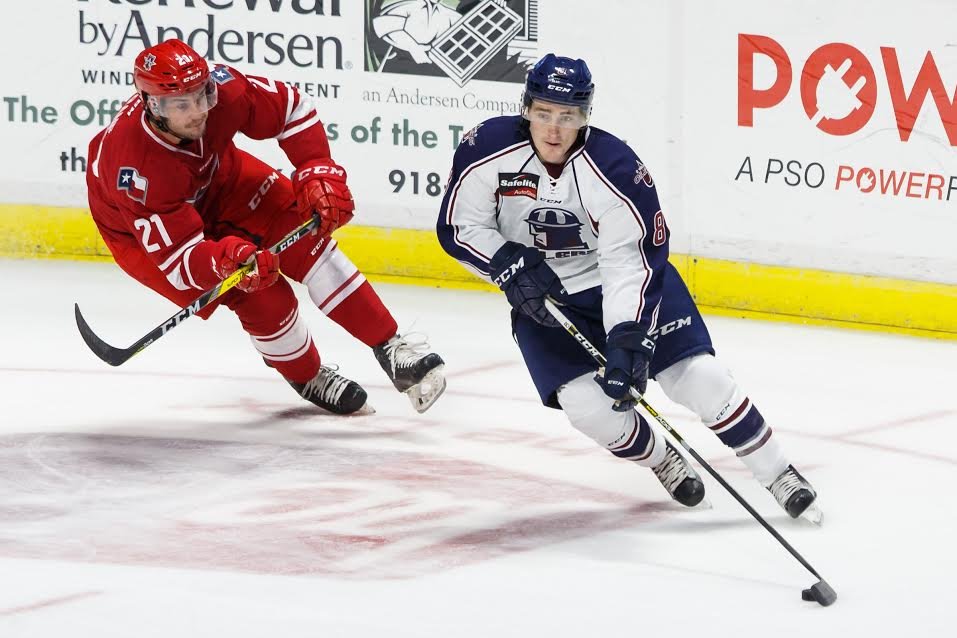 The Allen Americans take on the Tulsa Oilers at the BOK Center October 25, 2016 in Tulsa, Oklahoma. Photo / Kevin Pyle

Again, the Oilers flew out of the gate with a goal in the first minute, when Christophe Lalancette buried a shot over the glove of Fuel goaltender Jake Hildebrand. Leading 1-0 after one, Tulsa scored two goals 1:47 apart in the middle stanza, when Danick Paquette and Phil Brewer opened the Oilers’ advantage to 3-0. Indy broke Jamie Phillips’ shutout bid with a power-play goal in the third, and added a second goal midway through the frame to make things interesting. But Tulsa fought to the finish to preserve its lead and grab its sixth consecutive win to start the season, the first known time the Oilers have accomplished that feat dating back 45 seasons to 1964.

Quad City opened the scoring 6:32 into the first period, when Sam Warning capitalized on a 2-on-1 for his first goal of the night. Christophe Lalancette evened the score with the only second period goal on a nifty backhander over the glove of Mallards’ goaltender C.J. Motte for his second goal in as many nights. A lucky bounce led to the second Mallards goal early in the third period when Chris Francis’ shot sailed over the net, off the high glass and back over the net, before Francis followed up his own rebound in the crease and tapped it into the net. The Oilers again tied it up, when Brandon Martell blasted a shot that was tipped into the net by Phil Brewer. But Warning added his second goal, the game-winner midway through the final frame. Former Quad City goalie Brody Hoffman stopped 28 shots against his old team in his Oilers debut in the 3-2 loss.

Rookie goaltender Jamie Phillips started his pro career by winning his first 6 starts. Phillips leads the ECHL in wins (6), minutes (369) and is second in saves (169). He set a career high with 44 saves in Tulsa’s 3-2 win Tuesday against Allen, and stopped 34 shots in a 3-2 win against Indy on Friday…Wes Cunningham has 6 assists in his first 5 games as an Oiler. The veteran defenseman did not play Friday and Saturday with an injury…Christophe Lalancette and Phil Brewer each have goals in back-to-back games. Brewer has 3 points (2 goals, 1 assist) in his last 3 games.

Emerson Clark was named the ECHL Player of the Week last week for the first time in his career. Clark is tied for 7th with 9 points (4 goals, 5 assists) in 7 games…Reid Halabi has 33 penalty minutes, most in the ECHL….Darcy Murphy is tied for 6th among ECHL rookies with 6 points, tied for 2nd with 4 goals, and tied for first among rookies with 2 power play goals…Wes Cunningham is tied for 2nd among defensemen with 6 assists…The Oilers are tied for 1st in home wins (4), and are 5th in goals-per game (3.86)…Tulsa is 5-1-0 in one-goal games…Tulsa’s 6-0 start was the first known time the Oilers have ever won six straight to start a season, going back to at least 1964 (45 seasons).

Wednesday is “Dollar Hot Dog Night” at the BOK Center, when the Oilers host the Utah Grizzlies at 7:05pm. Fans can visit the designated hot dog stand on the concourse for $1 hot dogs!

The Oilers will be wearing special Denim Jerseys Friday night, when the team hosts the Missouri Mavericks at 7:05pm at the BOK Center. After the game, those game-worn “Canadian Tuxedos” will be auctioned off in the OneOK Club on the concourse level.

The Oilers wrap up the weekend with a 4:05pm rematch with Utah at the BOK Center. After the game, fans will have the opportunity to skate with the players. A limited amount of skates will be available for rent, but fans who have their own skates are encouraged to bring them.