OILERS SEE FULL WEEK OFF BETWEEN SUNDAY GAMES IN MISSOURI 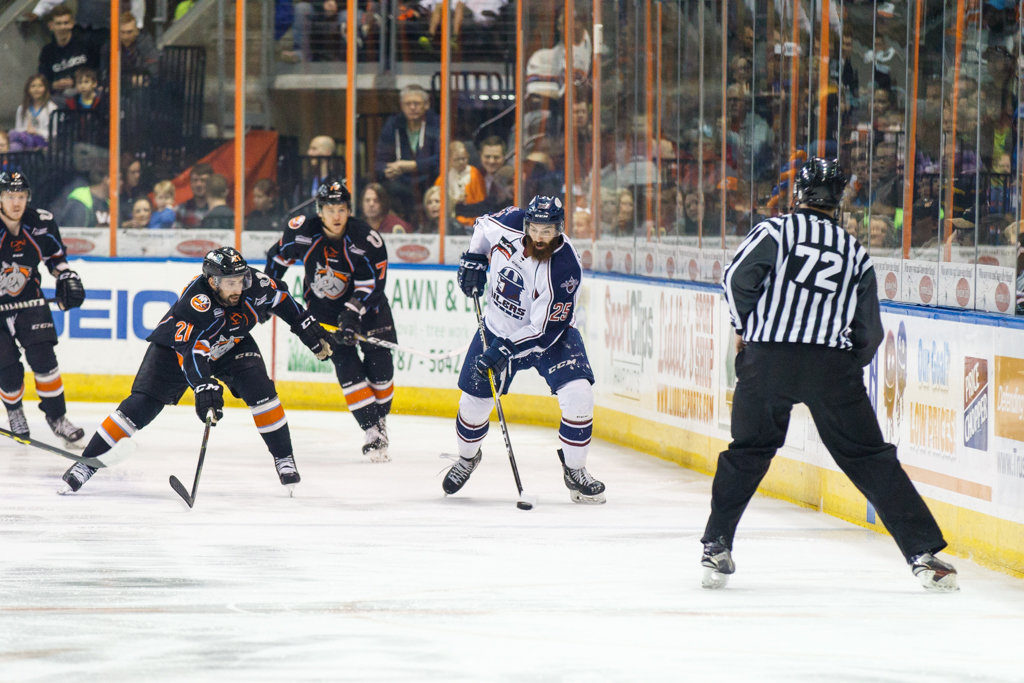 The Oilers jumped out to a 3-0 first period lead in Wichita Friday, thanks to markers from Danick Paquette, Adam Pleskach and Darcy Murphy. Tulsa then outshot the Thunder 18-8 in the middle frame, but couldn’t add to its lead, as Wichita’s Louick Marcotte scored twice in the third period to make it interesting. In the end, Oilers’ goaltender Colin Stevens stood tall, stopping 31 of 33 Thunder shots in a 3-2 win.

Wichita broke a scoreless tie late in the opening stanza of the rematch Saturday at INTRUST Bank Arena, when Gabriel Gagne fired a shot through a screen during a 5-minute power play. The Thunder carried that lead through the second period and into the third, but Oilers rookie Dylan Hubbs tied the score 53 seconds in on a power play opportunity for his first goal as a pro. Matt DeBlouw put Wichita back in the lead with 3:56 to play, but Dennis Brown evened things up one minute later to force overtime. In OT, Tulsa had a 4-on-3 power play for the last 2:53 of the extra frame, but Thunder goaltender Drew Owsley stopped all six chances to send the game to a shootout. Owsley turned away all three Oilers in the skills competition and Gagne provided the only goal to give the Thunder the narrow win.

Missouri tallied a pair of goals in each period Sunday to win their fourth straight over the Oilers 6-3. The game was tied 2-2 at the first break, as Radoslav Illo and Kevin Tansey scored for the Mavericks, and Eric Drapluk and Danick Paquette answered for Tulsa. But Missouri pulled ahead in the second with a 2-on-1 goal from Dan Correale and a power play goal from Dane Fox to lead 4-2 after two. Reed Seckel contributed the fifth Mavericks goal early in the third, before Dylan Hubbs brought Tulsa back to within two goals, with his second in as many nights. Shawn Pauly’s meaningless empty-net goal completed the scoring, as Stephon Williams out-dueled P.J. Musico in net.

Manitoba forward Dan DeSalvo is third on the Moose with 30 points (14g, 16a) in 49 games, after registering a 5-game point streak (2g, 3a) from February 25-March 4…Tulsa’s All-Star goaltender Jamie Phillips started in net for the Moose in a 5-4 loss at Chicago on Sunday. Phillips made 34 saves in the outing, and is 1-2-0, with a 3.97 goals-against average and .890 save percentage in four AHL appearances.

Forward Danick Paquette has three multi-point games (3g, 3a) in his last five for the Oilers. Paquette recorded a “Gordie Howe Hat-Trick” Sunday against Missouri, and also has penalty minutes in seven consecutive road games (49 minutes), one game shy of the longest such streak in the ECHL this season.…Rookie Dylan Hubbs has goals in back-to-back games, the first two of his pro career in just three games since signing an ATO Friday.

The Oilers have 58 points with 11 games remaining, and are 6 points behind Kalamazoo for the final playoff spot in the Central Division. The wings have 13 games left…Tulsa is 5-2-2 against the Central Division in 2017, but 1-12-1 against the Mountain Division in the new year…In taking 3 out of 4 points in Wichita last weekend, the Oilers picked up points in back-to-back games for the first time since January 8-13 (three games).