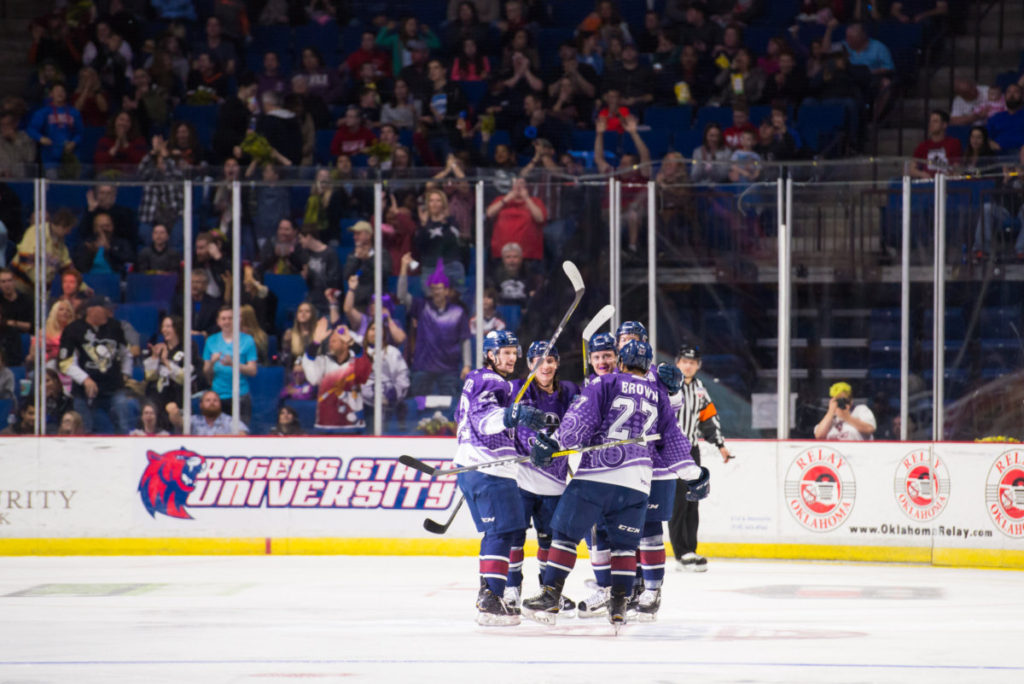 On a historic night in Tulsa, the Oilers saw a sellout crowd of 16,759 at the BOK Center, the second highest-attended game in ECHL history. Dennis Brown broke a scoreless tie early in the second period with a power play blast from the point, but Wichita added two power play goals of their own in the frame to take a 2-1 lead into the third. With just over two minutes left in regulation, Ryan Rupert gave the Thunder some insurance when he scored his second of the game. Blake Tatchell scored an empty-net goal to complete the scoring, as Drew Owsley stopped 36 of 37 shots in the win.

After a scoreless first period, Bryan Moore scored for Allen early and late in the middle frame to give the Americans a 2-0 lead after two. Tulsa closed the gap 2:02 into the third period, when Dmitri Ognev capitalized on an Allen turnover, but Tyler Barnes put the Americans back ahead by two just 3:25 later. Midway through the frame Ognev helped set up the second Oilers goal, scored by Dylan Hubbs to get Tulsa to within one. The comeback bid came up short, as Jamie Murray stopped 40 of 42 shots. The Oilers outshot the Americans 42-18 in the narrow defeat, extending Tulsa’s winless skid to 10 games.

Oilers forwards Phil Brewer and Danick Gauthier have signed professional tryout agreements with the Manitoba Moose on Monday. It will be the first AHL regular season experience for Brewer, who participated in Rockford’s AHL camp before the season started. Gauthier last saw AHL action in 2014-15, when he skated in three games for the Syracuse Crunch. Former Oiler Dan DeSalvo is third on the Moose with 35 points (16g, 19a) in 60 games…Tulsa’s All-Star goaltender Jamie Phillips is 1-4-1 in 9 appearances for Manitoba, with a 2.99 goals-against average and .903 save percentage.

Oilers goaltender P.J. Musico started 8 consecutive games, before Tulsa newcomer Jonah Imoo made his first start Saturday at Allen…Adam Pleskach has skated in 25 straight games since returning from an injury that kept him out 22 contests. Forward Dmitri Ognev has 6 points (3g, 3a) in 8 games against Allen this season, recording his second multi-point game Saturday—both have been against the Americans.

Oilers Head Coach Jason Christie recently coached his 1,000th ECHL game, March 19th at Toledo. In 14 ECHL seasons, Christie has the most wins in league history (546)…Tulsa’s sellout crowd of 16,579 Friday at the BOK Center was the largest ECHL attendance in team history, breaking last year’s mark of 14,265 set on March 18, 2016. It was the second largest crowd in the ECHL’s 29-year history, and the Oilers now hold two of the top six highest attended ECHL games.

The Oilers have just two home games left in the 2016-17 season. Tickets are available by calling the Tulsa Oilers front office at 918-632-7825 or visiting www.tulsaoilers.com