INDIANAPOLIS, IN – The Indy Fuel rode a three-goal second period flurry to a 4-3 win over the Tulsa Oilers Saturday in a game that featured 97 combined penalty minutes at Indiana Farmers Coliseum. 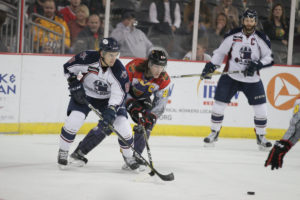 The Oilers were led by Assistant Coach Zac Desjardins, while Head Coach Rob Murray recovered at a Quad Cities hospital stemming from a medical emergency during Tulsa’s game Friday against the Mallards. (*Update Below*)

Tulsa tied the game on an early second period 5-on-3 power play, when Eric Drapluk fired a wrist shot from the top of the left circle past Fuel goalie Etienne Marcoux. The Oilers added another power play goal 2:16 later, when Alexandre Ranger set up Charlie Sampair with a perfect cross-crease pass that wound up in the back of the net.

Indy, however, went on to score three straight goals in just 2:39 of action to claim a 4-2 lead after two. The first two were scored by Zack Miskovic and Nick Bligh on consecutive power plays, and Cam Reid buried the third goal in the sequence.

Chris Joyaux brought Tulsa to within one with a blast from the left point that beat Marcoux with 3:11 to play, but the Oilers could not convert on a late man-advantage with a chance to tie.

Tulsa heads to Fort Wayne next to face the Komets at 4:00pm CT at Memorial Coliseum. The Oilers then head to Rapid City to face the Rush next Wednesday, Friday and Saturday.

**COACH MURRAY UPDATE: Tulsa Oilers Head Coach Rob Murray was released from a Quad Cities hospital Saturday afternoon after suffering a medical emergency during the second period of Friday’s game against the Mallards at TaxSlayer Center. Murray is expected to make a full recovery, and will return home to be with family until he is ready to return to the bench. The Tulsa Oilers organization would like to thank the entire hockey community for the overwhelming amount of support and well wishes sent Murray’s way the last 24 hours.