TULSA, OK – The Tulsa Oilers, depleted by injuries, dropped a hard-fought game 4-1 to the Missouri Mavericks Sunday at the BOK Center. The game wrapped up a season-long eight-game home stand, as the Oilers prepare for nine consecutive road games before returning to home ice March 31. 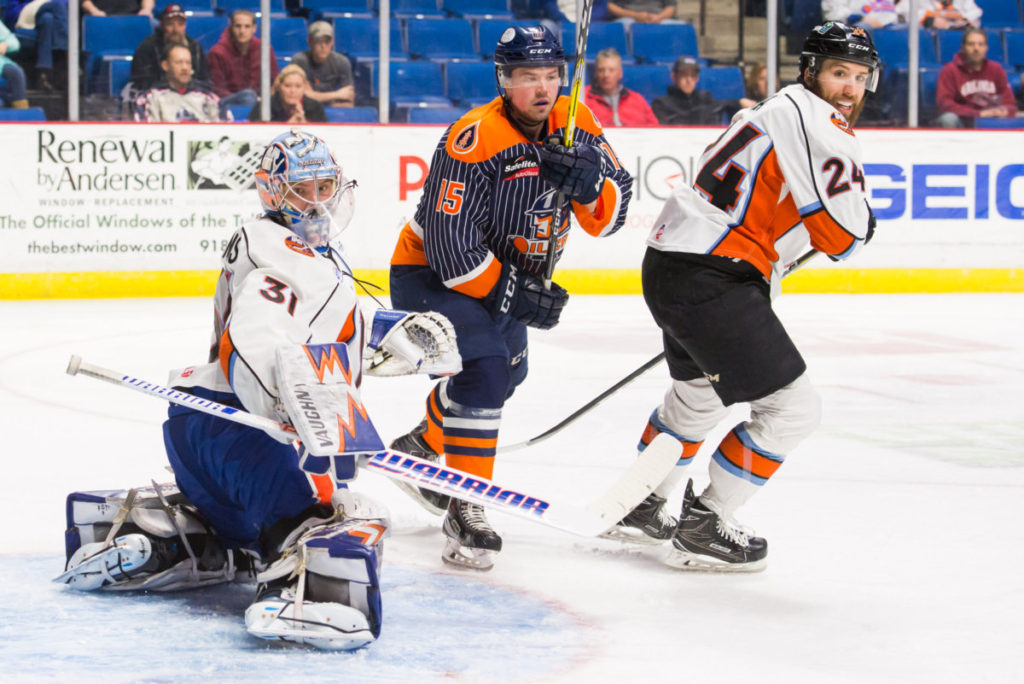 The Oilers outshot Missouri 11-9 in the opening frame, but Matt Robertson gave the Mavericks a 1-0 lead when he tapped in a rebound just outside the crease at 7:16 of the period. Missouri goaltender Stephon Williams turned away all 11 Tulsa shots in the frame.

The Mavericks added a goal on a second period 5-on-3 power play, when Dane Fox found a loose puck low in the left circle and buried the shot past a sprawled out Colin Stevens 6:39 into the stanza. Williams stopped 13 more Oilers attempts to keep his shutout intact.

Tulsa cut the Mavericks lead in half, when Eric Drapluk sent a shot through traffic that Kale Kessy deflected in behind Williams 4:06 into the third period. The Oilers generated several scoring chances on a 5-on-3 power play opportunity towards the end of regulation, but could not find the equalizer. Robertson added a second goal late off of a faceoff win, and Kevin Tansey provided an empty-net tally to complete the scoring. The Oilers outshot Missouri 43-25 in the loss.

UP NEXT: The Oilers spend nearly the entire month of March on the road, playing nine consecutive games away from the BOK Center. Tulsa first travels to Wichita Friday and Saturday, before finishing the long weekend in Missouri next Sunday. Friday’s game is scheduled for 7:05pm at INTRUST Bank Arena, and can be heard on www.tulsaoilers.com, “Listen LIVE”, or on ECHL.TV (away audio), with coverage starting at 6:50.