Oilers (11-3-0) remain undefeated at home ahead of three games at BOK Center this week. 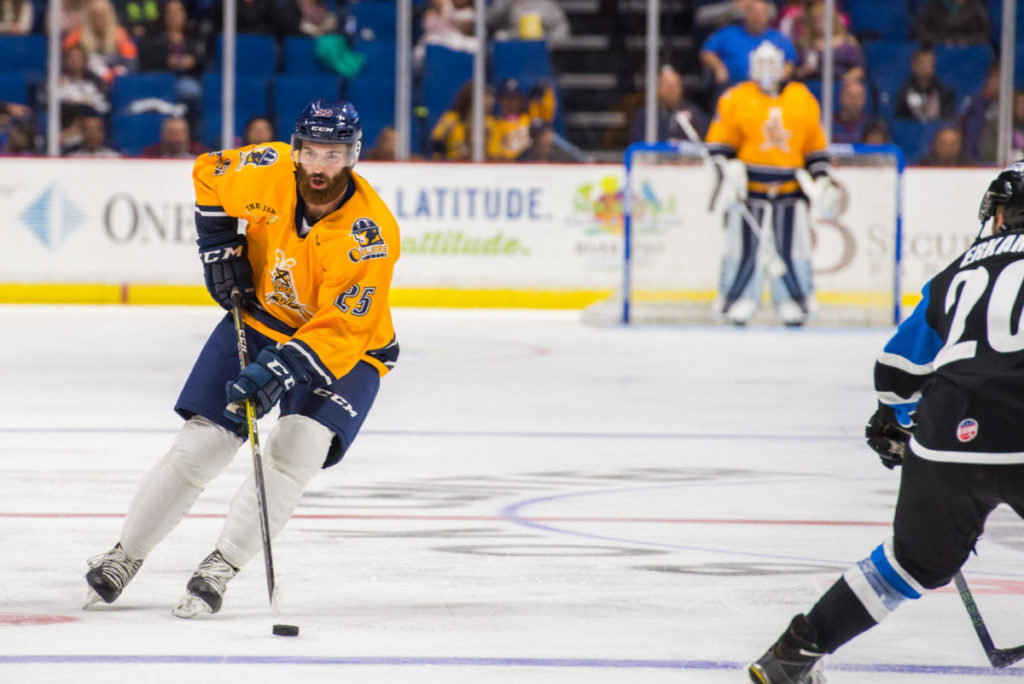 The Wichita Thunder take on the Tulsa Oilers at the BOK Center November 12, 2016 in Tulsa, Oklahoma. Photo / TeeJay Crawford

The Oilers shook off a Fort Wayne comeback to beat the Komets in overtime in the first of three meetings between two of the top teams in the Central Division. At the midway point of the second period, Tulsa led 3-1, thanks to goals by Phil Brewer, Kale Kessy, and a penalty shot goal from Emerson Clark. But the Komets converted on three power plays in the contest, including the equalizer from Kyle Thomas with 25 seconds left to force overtime. In the extra period, Dan DeSalvo fired a shot under the crossbar on the power play to keep the Oilers unbeaten at home (8-0-0). Goaltender of the Week Jamie Phillips won his tenth consecutive game to start his pro career.

Two goals each from Mitch Holmberg and Alexis Loiseau were too much for Tulsa Friday in Wichita. The Oilers battled back from a late 4-1 deficit with two shorthanded goals 25 seconds apart, when Adam Pleskach scored his second of the night, followed by a deflected shot by Shawn Bates to make it 4-3 with 3:47 left. But the Thunder would seal the win when Loiseau scored his second with 1:31 remaining. Phillips made 41 saves, one shy of his career high, in his first career defeat.

Tulsa stayed undefeated at home after orchestrating a comeback victory in the rematch against Wichita on Saturday. The Thunder led 1-0 after one, thanks to a power play goal from rookie defenseman Nick Trecapelli. But the Oilers evened the score in the second, when Axel Blomqvist buried his second goal of the season. Tyson Wilson chipped in his first professional goal out of a net-mouth scramble to give Tulsa their first lead of the weekend, and Emerson Clark added an insurance tally in the final minutes. The Oilers completed the first fourth of their home schedule 9-0-0, and Phillips advanced his league-best record to 11-1-0.

After Wednesday’s win against Fort Wayne, Dan DeSalvo and Kale Kessy both signed tryout agreements with the Oilers’ AHL affiliate, the Manitoba Moose. DeSalvo scored a goal and added an assist Friday in a 3-2 loss against San Diego. Kessy made his Moose debut Saturday and recorded 1 shot and 2 penalty minutes. Rookie Darcy Murphy is still in Manitoba, where he’s scored 1 goal in 4 games since signing a tryout agreement with the Moose at the beginning of November…Forward Emerson Clark was recalled Sunday by the AHL’s Chicago Wolves, after compiling 12 points (6 goals, 6 assists) and 57 penalty minutes in 14 games with the Oilers.

Tulsa has won 9 straight home games to start the season, 5 more home wins than the next longest streak…Jamie Phillips has won 9 consecutive starts at home. His streak of 10 straight wins to start his pro career came to an end Friday in the 5-3 loss at Wichita…Danick Paquette has 6 points (1 goal, 5 assists) in his last 5 games…Adam Pleskach has 7 points (4 goals, 3 assists) and is plus-9 in his last 7 games…Defenseman Dennis Brown has assists in 3 straight games, and 4 total assists in 6 games since returning from injury.

The Oilers are in first place in the Central Division, Western Conference, and ECHL with 22 points…Tulsa is 7-0-0 when scoring first and 6-1-0 in one-goal games…The Oilers power play is 23rd in the league (10%) and penalty kill is 25th (78.4%)…Tulsa has the third most 3rd Period goals (19) and second most total goals scored (51) in the ECHL…The Oilers are 7-0-0 when outshooting their opponent.

Wednesday is “Dollar Hot Dog Night” at the BOK Center, when the Oilers host the Rapid City Rush at 7:05pm. Fans can visit the designated hot dog stand on the concourse for $1 hot dogs!

The Oilers finish the week with a 4:05pm game against the Allen Americans at the BOK Center. After the game, fans will have the opportunity to skate with the players. A limited number of skates will be available for rent, but fans that have their own skates are encouraged to bring them.