The Oilers made the first move.  Midway (11:22) into the first period Christophe Lalancette fought and scored off of the pad of Thunder goaltender Sean Bonar. Helping off of the faceoff was Phil Brewer and Adam Pleskach.

The Oilers took five shots in the second period and the first three of them found the back of the net.  Ben Murphy got over the glove of Bonar after some bounce action to double the Tulsa lead, 2-0.

Wichita responded. It would be their only goal of the night. Landon Oslanski tallied his third goal in three consecutive games while putting the Thunder on the board with 6:38 left in the second frame.

The Oilers went on a roll of unanswered goals. Eric Drapluk accepted a pass right in front of the net from Brian Nugent to regain the Tulsa two-goal lead.

Tom Kroshus, his second point of the evening, fired a wrist shot from the right wing that would also have success. The power play goal was assisted by Dennis Brown and Lalancette.

Another Oilers player and another goal. Roberts Lipsbergs inked his 11th goal and second point of the night as well. The Oilers took a 5-1 lead over the Thunder, scoring four goals in six shots. David Shantz would replace Bonar in net for Wichita.

The Oilers victory keeps them in the race for the final spot in the Western Conference for the Kelly Cup Playoffs.Tulsa will face the Thunder again on Friday night in Kansas before hosting Wichita inside the BOK Center on Saturday. 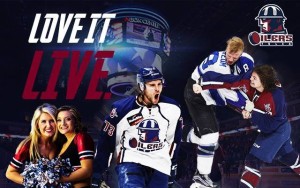 TONIGHTS MATCHUP
Tulsa and Wichita go at it tonight for their 11th matchup of the season. The Oilers are 7-1-1-1 against the Thunder—deeming themselves winners as they clinch the StoneWolf Casino Cup. Throughout the inner-team duel, the Oilers have earned the rights to the cup the last two season with the most points against one another.

Last night the Oilers dominated the hottest team in the ECHL, the Missouri Mavericks, 4-1. On the hunt for a playoff spot, Tulsa tries to earn another two tonight against the Thunder.

The Oilers are 23-11-4 against Central Division opponents.

ROAD TO KELLY
The Tulsa Oilers are ninth in the Western Conference Standings—just one spot out of the final playoff position. Tulsa will look to increase their 73 points this week as they have an opportunity for an extra six. The magic number for the Quad City Mallards is three. If the Oilers happen to tie the Mallards, Quad City would be the breakers.

BITING BATE
Forward Shawn Bates recently joined the Oilers roster. In his first four games, the newcomer has recorded three goals. Bates, out of Merrimack College, owns five points in seven games with the Tulsa. The Vermilion, Alberta native came to the Oilers off waiver claims after spending 17 games in the ECHL with the Atlanta Gladiators.

POWER [PLAY] HOUSE
When in the BOK Center, the Oilers bring it. In their own home, the Oilers are second in the ECHL on the power play. Tulsa may be in last place on the road with the man advantage but at home they have 21.4% just behind the Fort Wayne Komets. They have 21 total power play goals on 98 attempts in 35 games.

MOOSE MOVES
The Moose still have Oilers’ leading goal scorer, Dan DeSalvo, on loan. DeSalvo, on a contact with Tulsa, made his AHL debut with the Moose where he produced an assist. In his second game, DeSlavo tallied his first AHL goal against the Grand Rapids Griffins on Friday, March 11. In 11 games, the forward has seven points. Last week goaltender Jussi Olkinoura was both recalled by the Manitoba Moose then reassigned to Tulsa. Olkinuora made 21 saves last night against the Mavericks.

OIL DROPS
The Oilers are fifth in the ECHL in shots against with a 27.66 percentage… Kevin Carr is twelfth among goaltenders with a 2.39 goals against average and third in minutes with 2616… Phil Brewer is third among rookies with 24 goals and tied for first among rookies with six game-winning goals… Tulsa leads in team high penalty minutes with 109 on 01/02/16…

The Mallards magic number is now 1! Thye just need to earn one more point to get into the playoffs. The Oilers will have to win their next two games.