In what was a big playoff push for the Oilers, Tulsa fell to the Quad City Mallards on Friday night 5-3.

The Mallards took the first frame. Two even-strength goals, less than a full minute apart gave Quad City a 2-0 lead over Tulsa. The first went to Sam Warning, his 14th. With the help of Jared Knight, Tanner Eberle doubled his team’s lead when the forward got past Oilers goaltender Jussi Olkinuora.

Ben Murphy, 8:36 into the second period, not only scored the Oilers first goal but his first professional goal. Tom Kroshus (who skated over to collect Murphy’s puck for him post goal) and Jacob Poe collected assists.

Three minutes later, Matt Carey got an unassisted one through the legs of Olkinuora for his 23rd of the season and a 3-1 lead for the Mallards.

A deflection and a second goal for Warning gave the Mallards their 4-1 advantage with just over a minute to go in the second period.

Christophe Lalancette stole the start of the third period when he stole the puck 54 seconds in­­ and cut the Mallards lead to two.

Eric Drapluck kept hope for Tulsa at the 17:42 mark when he found the back of the net from Brady Ramsay and Murphy.

Ultimately the Oilers would fall 5-3 to the Mallards and drop five points below Quad City in ECHL Standings.

Tulsa is back at it tomorrow night and will fight for two more points in Evansville against the IceMen. 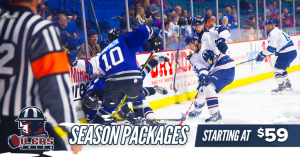 Looking for things to do in Tulsa? Don’t like hockey? Or sports at all? An Oilers game might still be the best event for you even if those theories apply. From date night to family night, an Oilers game supplies enough thrill, entertainment and action to get anyone going. Whether you go places for beer, food or free things–you can get it all at a Tulsa Oilers game. Love the beer? The BOK Center obviously supplies many options, but new to the Oilers, Tulsa, and the entire world is the Breakaway APA–an American Pale Ale created just for this East Coast Hockey League team in Tulsa, Oklahoma crafted by Dead Armadillo Brewing Company. You can get this through their outlets, at the BOK Center at an Oilers game, or at select Oilers sponsor locations such as Midleton’s Irish Pub.

Ben Murphy is one of the newest members to the Tulsa lineup. The Duxbury, Massachusetts native just finished the season with the Bowling Green State University Falcons. Murphy isn’t the only player who has come from Bowling Green this season. Dan DeSalvo, currently making waves with the Manitoba Moose, and Connor Kucera both made their way to Tulsa after their time in a Falcon sweater. Bowling Green has made helped produce many of Tulsa’s top players.

Murphy, an exercise science major, also lettered in baseball in high school in addition to playing three years of varsity hockey at Catholic Memorial High School. Between high school and starting at Bowling Green State University, Murphy played for the Carleton Place Canadians of the Central Junior Hockey League. Not only did he tie for the Carleton Place in playoff scoring, he was also named to the 2011-2012 Central Junior Hockey League All Star Team. In his introductory year, he played 40 games and ranked third among all rookies with thirteen points. He scored six goals in the year. The next season Murphy played in thirty eight games for the Falcons where he had a career high of thirteen goals and eight assists. He was only six players that reached the twenty point plateau. Murphy was able to play in thirty nine games in his junior season. He scored eleven goals and tied for fourth with twenty one points, the same as his sophomore season. His role in a weekend sweep of Ferris State, Murphy was awarded the WCHA’s Offensive Player of the Week for lighting the lamp twice, as well as assisting in another.

UConn product defenseman Jacob Poe hails from Arlington, Texas a suburb of Dallas. Before being spending cold winters in Connecticut, Poe played for the Topeka Roadrunners of the North American Hockey League. In fifty eight games, he recorded thirty points- four goals and twenty six assists. His season total led him to a career plus-23 rating and a career plus-62 rating over three seasons. He helped the Roadrunners to the 2001 President Cup Championship and was featured in the North American Hockey League Top Prospects Showcase.

In his first season as a Husky, Poe played in thirty eight games, earning eight points through three goals and five assists. The next season he played in all thirty seven games of the season. His career high of four assists was registered against a 5-4 victory against Mercyhurst. In a game against Sacred Heart he was able to add three assists to his season total of sixteen assists. During his junior season with the Huskies Poe lead all UCONN defensemen with a total of fifteen points and four goals.

The Tulsa Oilers have one remaining regular season game at the BOK Center. Prior to puck drop, the Oilers are hosting a block party outside the BOK Center starting at 4:30pm on April 9th. The party will feature the Corvette Club of Tulsa, food, games, and lots of family fun! After you enjoy a little fun in the sun, head on in to see the Oilers take on the Wichita Thunder one last time before the 2015-2016 season wraps up.  The season will wrap up with the boys wearing a special edition Harley Davidson jersey. These sweaters will be auctioned off after the game in the OneOK Club, so make sure you plan to stay after the game to get your hands on one of these sick sweaters.

The Oilers loss to the Mallards made things harder for the Oilers but not impossible for a playoff position. Tulsa needs to get a few wins under their belt.